The highest-scoring American ace in history was Richard Bong, who had 40 air victories flying P-38 Lightnings in the Pacific Theater during World War Two. The most famous of the  air aces, the “Red Baron” Manfred von Richthofen, had 80 air victories during the First World War. But the highest-scoring air ace of all time remains largely unknown to most Americans, perhaps because he flew for the Nazis. Erich Hartmann, flying a Messerschmitt Bf-109 on the Russian Front in the Second World War, scored an incredible 352 air victories, making him the most successful fighter pilot in history. 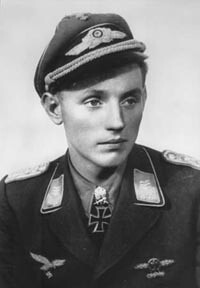 Erich Hartmann was born in 1922, in Wurttemburg, Germany. His father was a doctor who had served in the Kaiser’s Army during the First World War, and his mother was a licensed airplane pilot who instilled a love for flying into Erich at an early age. By the time he was 14, Hartmann had already received his glider-pilot license and was teaching flight lessons to children in the Hitler Youth. He received his powered-aircraft license in 1939 and joined the Luftwaffe in 1940. In 1941, while studying “Advanced Aerial Gunnery”, young Hartmann pulled a stunt by buzzing his airfield, and was confined to ground duty for a time. After completing his fighter training, he was assigned to JG-52, an air group on the Russian Front. Hartmann’s squadron was under the command of Dieter Hrabak, a professional soldier who took a keen interest in training his pilots in the harsh reality of air warfare. Hrabak chafed at the ideological focus of the Nazi Party, and flatly told his new pilots that if they were fighting for National Socialism and the Fuehrer, they had best join the Waffen SS instead. Here in Russia, he told them, was a bitter war against a formidable opponent, and only clear-headed professional warriors would survive.

The newly-arrived Hartmann was assigned as wingman to Paule Rossman, an experienced pilot who would end the war with 93 air victories. Hartmann also got valuable advice and training from other pilots in JG-52, who included Alfred Grislawski (133 air victories),  Walter Krupinski (197 victories), Hermann Graf (202 victories), and Gerhard Barkhorn (301 victories). Hartmann flew his first combat mission on October 14, 1942. When the patrol spotted a group of Soviet Ilyushin Il-2 ground-attack planes, Hartmann broke all the rules of air warfare by breaking formation, leaving his wingman Rossman, and diving at top speed, alone, onto his target. His shots went wild, he nearly collided with the Russian, and he suddenly found himself surrounded by Soviet planes with rear gunners all shooting at him. Fortunately for him, he was able to duck into a cloud bank and escape, but on the way home he ran out of fuel and had to crash-land his Messerschmitt. The experience sobered him, and he turned from an exuberant impetuous flier into a disciplined and self-controlled hunter.

Under the guidance of Rossman and Grizlawski, Hartmann began to perfect the basic tactic he would use throughout his career–“get in close”. Hartman would carefully stalk his target and approach it unseen from behind and below, getting in closer and closer until, as he put it, “the enemy filled my whole windscreen, and I could not miss”. Often, he would open fire at ranges of less than 100 feet. But his first air victory had also illustrated the danger of this technique–when the Il-2 broke apart, pieces of the wreckage hit Hartmann’s own fighter and damaged the engine, forcing him to crash-land. Although Hartmann was never forced down by enemy fire, he would crash-land a total of 14 times during the war, either from mechanical failure or from damage caused by debris from his own victims. At one point, when he had almost 100 victories, he was hit by debris and was forced to land behind Soviet lines, where he was captured by Russian ground troops. Faking an internal injury, Hartmann was placed in a truck and taken towards a field hospital–where he escaped and made his way back to German lines.

Throughout 1943, Hartmann’s score rose quickly. He reached “ace” status on March 23 by shooting down another Il-2, his 5th victory. By July his score was 42, including 7 Russian fighters in one day. In October, with a score of 148, he was awarded the Knight’s Cross.

By this time, Hartmann had become equally famous (or infamous) to the Soviets, who recognized him by his radio callsign “Karaya-1”, and also from the black tulip-petal pattern painted on the nose of his airplane. A bounty of 10,000 rubles was placed on Hartmann’s head, but most Soviet pilots who recognized his aircraft preferred to run away instead (they called him “The Black Devil”). Hartmann, who was now training student pilots of his own, responded to this by placing new inexperienced pilots in his fighter, safeguarding them from attack.

By May 1944, Hartmann had 202 confirmed victories, and was ordered, along with three other fellow pilots, to Germany to be awarded new medals personally by Hitler. The pilots all showed up for the ceremony drunk on cognac. On May 21, Hartmann encountered his first American airplanes, during a bomber raid over Romania, and shot down one of the escorting P-51 Mustangs. By June 1944, Hartmann was awarded the “Swords” decoration for his Knight’s Cross. When he arrived in Berlin to receive his medal, he was told that he would have to surrender his sidearm before entering the room with Hitler (this was just after the July 20 assassination attempt). Hartmann refused, saying that he would decline to accept the medal if he was not trusted. He received his decoration with his pistol on his hip.

In August 1944 alone, Hartmann scored another 35 victories, including 8 on August 23. The following day he scored 11 more, bringing his total to 301 and making him the first fighter ace in history to score 300 victories (only one other pilot, Gerhard Barkhorn, would equal that feat). The very next day he was ordered to Berlin to receive the “Diamonds” decoration from Hitler–and was then banned from combat flight. He was assigned instead to training for the Me-262 jet fighter.

As Germany grew more desperate for experienced pilots, however, Hartmann’s combat status was resumed. He was asked by German fighter commander Gen. Adolf Galland to join a special all-aces Me-262 squadron that was defending Berlin, but Hartmann declined, saying he wanted to return to his old Bf-109 unit. On April 17, 1945, Hartmann shot down a Soviet Yak-9 fighter, making him the only ace in history to reach 350 victories. Hartmann’s last air victory, another Yak-9, came at nine in the morning on the day Germany surrendered–May 8, 1945. It was his 352nd victory.

Hartmann and his unit surrendered to American troops, but a provision in the Yalta agreement specified that German units that had fought primarily on the Eastern Front were to be surrendered to the Soviets–the Americans therefore turned Hartmann over to the Russians, where he was interred in POW camps until finally being repatriated to West Germany in 1955. Hartmann became an officer in the new West German Air Force and commanded Germany’s first all-jet F-86 unit, the JG-71 “Richthofen”, until a disagreement with his superiors over the safety of the new F-104 Starfighter (Hartmann thought the plane was a death-trap for the pilot) led to his retirement in 1970. He continued as a private flight instructor, and sometimes flew aerobatic shows with his fellow ace Adolf Galland.

Of the top-scoring air aces in World War Two, all of them were German. Over 100 different Luftwaffe pilots had a score of 100 or more air victories; 15 Germans scored over 200 victories, and 2 aces (Hartmann and Barkhorn) had over 300. The nearest competitors were Finnish pilot Ilmari Juutilainen (who was flying for the Axis against the Russians) with 94 victories, and Japanese Zero ace Hiroyoshi Nishizawa, with 87 victories against the Americans. The highest-scoring Allied pilot was Soviet ace Ivan Kozhedub with 62 victories (he later shot down two American P-51s over Korea).

Why did the Germans score so much higher than their Allied counterparts? Much of the reason is the disparity between the two air forces.  The Soviets were flying early Lavochkin, MiG, Yakovlev, and American-made Lend-Lease P-39 fighters, while the German aces flew the Messerschmitt Bf-109 and the Focke-Wulfe 190, which far outclassed the Soviet aircraft. The Russian pilots were also poorly-trained and poorly-equipped, unlike the superbly-experienced Germans.

American and British pilots scored relatively low numbers because they only flew for a limited number of combat tours, then were rotated out for PR tours or to train new pilots. The Germans, on the other hand, were in for the duration, and they flew until they were killed, captured, or the war ended.