Every child can recognize a Pelican–their large prominent throat pouches make them unmistakable. Not long ago, Peilcans were threatened with extinction due to habitat loss and the effects of DDT in the environment. Today, they have made a remarkable comeback and are a conservation success story. 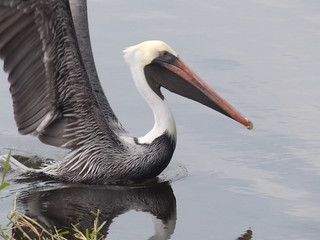 There are eight recognized species of Pelican in the world, all of them in the genus Pelecanus. Two of these species, the White Pelican (Pelecanus erythrorhynchos) and the Brown Pelican (Pelecanus occidentalis), are found in the US, ranging along both coasts. The western populations of the Brown Pelican have a bright splash of red on their throat, and are sometimes considered as a geographical subspecies–the “California Pelican”.

Fossil pelicans have been found in Oligocene deposits in France, 30 million years old. DNA testing has shown that their closest living relatives are the Shoebills, a large heronlike bird found in eastern Africa.

Although the Brown Pelican is a very large bird, it is actually the smallest of the pelican species. The wingspan can reach up to 8 feet, and underneath all their feathers the birds may weigh as much as 10-12 pounds. They are almost exclusively saltwater and are seldom found far from shore. Although most other Pelican species hunt by floating along on the water in small groups and scooping up fish which they herd towards each other, Brown Pelicans are aerial hunters; they prefer to glide along just above the water surface and, when a fish is spotted, plunging in to seize it with their enormous beaks and throat pouches, expelling all the sea water at the surface and then swallowing the fish. Many times, groups of Brown Pelicans can be seen following other predators like Dolphins, who drive fish near the surface where the pelicans can easily reach them. Pelicans typically eat about half their body weight in food each day.

Breeding takes place once a year in the spring. The birds prefer to nest in large colonies on islands as a protection from predators, usually among mangrove stands along shore. The nests can either be on the ground or in the trees. The female will lay two or three eggs, which hatch in about 30 days and are fed by both parents for about ten months until the young leave on their own. Juveniles are more brownish colored than adults and lack the bright yellow head patch. They reach maturity in 2-3 years and then develop the adult plumage. Captive Pelicans have lived up to 30 years.

In the late 60’s and early 70’s, the populations of Pelicans in the US began to noticeably decline. Research undertaken in Tampa Bay by the University of Florida demonstrated that the problem was being caused by the pesticide DDT, then in heavy use to control mosquitoes and agricultural pests. The DDT was entering the food chain through contaminated insects and small invertebrates, which were then eaten by fish and concentrated in the body tissues of predators like Pelicans who ate the fish. The DDT caused the birds to develop unusually thin eggshells, which then broke under the parent’s weight when they attempted to incubate the eggs by sitting on them. In 1970 the state of Florida banned the use of DDT, and the Federal Government followed suit in 1972. Efforts were also made to protect and restore the shoreline mangrove habitats used for breeding. Over the years the east coast population of Pelicans recovered, and the Brown Pelican was “de-listed” in 1988.  The west coast population of California Pelicans has not recovered as quickly, but population levels have grown steadily, and the subspecies is now being considered for de-listing. It is estimated that there are at least 650,000 pelicans in the US.