Everyone knows that the first manned airplane flight was made in December 1903, by two obscure bicycle manufacturers from Ohio named Wilbur and Orville Wright. But many people don’t know that the Wright Brothers had competition, and one of the most famous scientists in the country, with generous government financing, was also attempting to get into the air. His last attempt was on December 8, 1903–just nine days before the Wright Brothers . . . 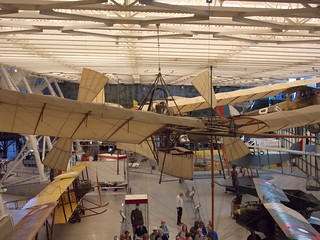 The Langley Aerodrome A, on display at the Smithsonian’s Udvar-Hazy Center

In 1886, Samuel Pierpont Langley attended a lecture on the possibility of manned flight. By this time, balloons had already carried people into the air, and a small but enthusiastic group of dreamers had begun to explore the idea of a controllable heavier-than-air craft that could carry people aloft. But unlike most of these dreamers, Langley had the resources available to make a serious attempt at building such a machine–he was the Secretary of the Smithsonian Institution in Washington DC, and he had access to government funding and to the best scientific minds in the country.

Langley, who had been an astronomer at the University of Pittsburgh before working for the Smithsonian, began a systematic study of heavier-than-air flight. His first small models were powered by a wound-up rubber band. He then spent several years attempting to build small but powerful engines, experimenting with electric motors, gasoline internal-combustion engines, and even with motors that used gunpowder as fuel, before settling on a steam engine. In 1896, Langley fit a small gasoline-fueled steam engine  to a 16-foot unmanned model that he called the “Aerodrome”. The Aerodrome had tandem wings–one in front of the other–which were dihedral, bent into a shallow V-shape for stability. In May 1896, he launched his Aerodrome Model Number 5, using a catapult, from a houseboat in the Potomac River. It was a complete success–the model flew in a straight and steady path, covering 3,300 feet in 90 seconds. In a second test flight in November, the modified Aerodrome Number Six flew 4,200 feet at a speed of 30 miles per hour. He had proven that a powered heavier-than-air flying machine was possible.

With these successful tests, Langley now assumed that he could simply scale up his small models and add a more powerful engine to produce a “Great Aerodrome” that would be capable of carrying a pilot.

When the Spanish-American War broke out in 1898, Langley told the US War Department about his flying machine experiments. The Assistant Secretary of the Navy, Theodore Roosevelt, expressed interest and a willingness to fund further work, and the project was given the green light by President McKinley. The War Department eventually spent over $50,000 financing Langley’s experiments. Langley hired an assistant, Charles Matthew Manly, an engineer who had just graduated from Cornell University. Manly was in charge of producing the engine for Langley’s flying machine, and would also be the pilot.

By this time, internal-combustion engines had been improved remarkably in power and reliability, and Langley decided to use a gasoline engine in his Aerodrome. Under Manly’s supervision, the Smithsonian contracted with Stephen Marius Balzer, a Hungarian living in New York, to design and build a lightweight yet powerful “aero engine”. Balzer had already built one of the first automobiles in the US, powered by a three-cylinder internal combustion engine. Balzer now began work on a five-cylinder version, and in anticipation, Langley began building his full-scale Aerodrome A from wood and canvas, in a work shed behind the Smithsonian Castle on the National Mall.

Balzer, however, ran into a series of problems.  His designs were for a rotary engine, in which the entire motor spun around on its axis, spinning the propeller along with it. The design had worked well for his automobile, but enlarging it for an aeroplane presented a whole new series of challenges, and by the summer of 1900, he had still not produced a workable design.

After a trip together to Europe to examine new developments being made there in gasoline engine technology, Langley and Manly abandoned Balzer’s rotary design, and focused on a water-cooled radial engine instead, in which the fixed-position cylinders would rotate a crankshaft to spin the propeller. By September 1900, Manly had made a working model capable of producing 12 horsepower, and reached 18 horsepower by March 1901. In a quest for more power and less weight, Manly continued to modify the engine, increasing the size of the cylinders and making them of lighter materials. By March 1903, Manly triumphantly wrote to Langley, “The engine proper weighs 120 lbs., and develops on test 52 brake horsepower….I am prepared to risk myself with it in actual flight.” That summer, Langley carried out a final flight test with a one-quarter scale model of his Aerodrome A, then decided he was ready for a manned flight. Like the models, the Aerodrome A would be launched by catapult from a houseboat anchored in the Potomac River. Charles Manly would be the pilot. The 69-year-old Samuel Langley had been working towards this point for 17 years.

On October 7, 1903, Manly climbed into the cockpit of the Aerodrome A as a small flotilla of press reporters and photographers looked on. The engine was started, the twin propellers whirled, the catapult was released–and the Aerodrome dropped ignominiously into the water. Much of its structure was broken by the impact; Manly struggled out of the wreckage and swam to the boat. The derisive press reported that Langley’s Aerodrome had flown “like a handful of mortar”.

Upon investigation, Langley and Manly concluded that the plane was too nose-heavy, and modified the design to move the balance point further back. Manly explained to the press, “The balancing, upon which depends the success of a flight, was based upon the tests of the models and proved to be incorrect, but only an actual test of the full-sized machine could determine this.”

On December 8, Langley and Manly were ready for another try. Once again, Manly climbed aboard, once again the engine was started, once again the catapult was triggered–and once again, the Aerodrome dropped into the water.  This time, the tail got tangled in part of the catapult, and both wings broke away as the plane accelerated down the catapult. Manly fished himself from the freezing water and swore intensely as the press once again jeered.

Where had Langley gone wrong? He had been on the right track; his engine designs were far more advanced than the crude 12-horsepower home-built Wright brothers four-cylinder inline engine. Balzer’s original rotary engine concept would power most of the aeroplanes used in the First World War, while Manly’s radial engine concept would later power many of the aircraft used in the Second World War. Langley’s mistake was in assuming that he could simply scale up his small aero models to produce a flyable airframe. Unlike the Wright Brothers, who had done extensive (but secretive) experiments with full-scale gliders, Langley had never tested a full-size version of his design, and was therefore unaware that the exponentially-increased drag and stresses of flight in a full-scale plane required that the airframe be very much stronger, proportionately, than any small-scale model. While his engine was more than enough to get it off the ground, Langley’s airframe was far too weak to withstand the stresses of flight.

Langley had also neglected another crucial area of aeronautics–flight control. His Aerodrome had nothing akin to the Wright Brothers’ “wing-warping” system, and Langley’s propeller was a crude affair made from a canvas-covered wooden frame, instead of the sophisticated solid wooden propeller (designed with the help of a homemade wind tunnel) that the Wright Brothers had produced. Had Langley’s plane actually achieved flight, it would have traveled only in a straight line, and would not have been capable of maneuvering.

In 1914, airplane designer Glenn Curtiss was asked by the Smithsonian to evaluate the Langley Aerodrome A to see if it would have been capable of getting into the air. After strengthening and reinforcing the airframe and adding floats to allow it to take off from the water surface rather than using a catapult, Curtiss did indeed make some short (up to five seconds) flights with it (the first flight made by the Wright Brothers had lasted twelve seconds). He was able to make longer flights by switching out for a more powerful engine to make up for the extra weight of the floats.

Samuel Langley died in 1906, a broken man who was mocked and laughed at by the press and public. Despite his failure to make a successful flight, though, his role as an aviation pioneer was not forgotten by the US Navy–when the first American aircraft carrier was built in 1920, it was christened the USS Langley in honor of the Smithsonian Secretary and his Potomac houseboat.

Langley’s Aerodrome Model Number 5, the first to fly successfully, is now on display at the Smithsonian Air and Space Museum, in the “Pioneers of Flight” gallery. The Aerodrome A was returned by Curtiss to the Smithsonian and was restored back to its original 1903 configuration, then was displayed in the Air and Space Museum as “the first airplane capable of flight”. That sparked a feud with Orville Wright and prompted him to angrily donate the original 1903 Wright Flyer to the London Museum of Science instead of the Smithsonian.

In 1948, after the Smithsonian withdrew its claims about the flight-worthiness of Langley’s craft, the Wright Flyer was returned to the US and placed on display at the Smithsonian, first in the “Milestones of Flight” area, and then in its own “Invention of the Aerial Age” gallery.

The Langley Aerodrome A was placed into storage for years, until it was finally placed on display at the Smithsonian’s Udvar-Hazy Center.