The 1975 Apollo-Soyuz Test Project was billed as a scientific experiment to test the possibility of an emergency space rescue. In reality, it was a carefully planned political stunt, designed to bring two superpowers together and help prevent the end of the world. 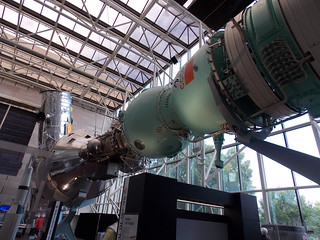 The Apollo and Soyuz spacecrafts, joined by their docking module. On display at the Smithsonian Air and Space Museum.

By 1972, the Cold War between the US and the Soviet Union had been raging for over two decades. Both sides had built massive nuclear arsenals; both sides had waged a series of proxy wars in Asia, South America and Africa; and both sides had approached the brink of global thermonuclear warfare during the Cuban Missile Crisis. Now both sides, exhausted and overextended, sought a way to ease tensions. From 1972 to 1974, President Richard Nixon and Premiere Leonid Brezhnev visited each other’s countries for a series of talks. The result was the policy of “detente”, a new attitude of “peaceful co-existence” between the two superpowers that would avoid conflicts and search for areas of cooperation.

One of these areas was the Space Race, which had begun with the Soviet launch of the Sputnik satellite in 1957 and had recently continued with the American moon landingin 1969. In some of their earliest talks in 1972, the two leaders proposed a joint space mission using the Soviet Soyuz craft and the American Apollo. Billed as a “test project” to assess the possibility of a space rescue, in reality the “Apollo-Soyuz Test Project” (or “Soyuz-Apollo Test Project”, as it was known in the USSR) was purely a political stunt with the sole aim of highlighting the ideal of international cooperation.

Two crews were selected for the ASTP mission.  In the US, it was announced that Thomas Stafford, JackSwigert, and Donald “Deke” Slayton would be flying on Apollo 18. Stafford had already flown on two Gemini missions and had commanded the Apollo 10 dress rehearsal flight for the Moon landing. Deke Slayton had been selected as one of the original Mercury astronauts, but had been grounded for a medical issue with his heart; he had just been returned to flight status, and ASTP was his first spaceflight. Jack Swigert had been a backup for the aborted Apollo 13 moon-landing mission, and was assigned to the primary crew when Ken Mattingly was grounded after being exposed to measles before the flight. Shortly after this crew was announced, Swigert was removed as punishment for his evasive testimony during the NASA investigation into the Apollo 15 “stamp scandal”, in which astronauts had taken some 400 unauthorized postage stamp covers into space to later sell as souvenirs. Swigert was replaced on the Apollo 18 crew by Vance Brand; ASTP would be Brand’s first spaceflight.

The Russians selected Alexei Leonov to command the Soyuz 19. He had been the first human to walk in space, from Voskhod 2 in 1965. With him would be Valeri Kubasov, who had flown on Soyuz 6.

In 1973, both crews began training. Each took several trips to the other’s country to visit its space facilities and familiarize themselves with each other’s spacecraft and systems. They also began intensive language studies so they could speak to each other; they found it worked best when the Americans spoke Russian and the Soviets spoke English.

There were also technical challenges to be met. The American Apollo used a low-pressure 100% oxygen atmosphere while in space, but the Soviet Soyuz used a nitrogen-oxygen mixture at normal atmospheric pressure. This made it impossible for the two craft to dock directly with each other, and it was agreed that NASA engineers would take the responsibility of constructing a separate docking module, 10 feet long and 4 feet wide, that would act as an airlock between the two vehicles. Modifications also had to be made to both nations’ radio communications network to allow flight controllers in Russia to work together with their counterparts in the US.

The Apollo-Soyuz Test Project flight took place in July 1975. The Soyuz launched first, on July 15, from the Baikonur Cosmodrome in the USSR. It was the first Soviet launch to be broadcast around the world on live TV. On their third orbit, Leonov and Kubasov established contact with the joint Soviet-American communications network, and maneuvered into an orbit for docking. Apollo 18 was launched 8 hours after the Soyuz. On July 17, the rendezvous was completed, and Vance Brand maneuvered the Apollo’s docking module into contact with the Soyuz. The docking was completed at noon on July 17, over the Atlantic Ocean. “Soyuz and Apollo are shaking hands now,” Leonov reported.

Three hours later, the airlock wasready, and TV viewers around the world watched as Stafford and Leonov met and shook hands. Congratulatory radio calls were made by President Nixon and Premiere Brezhnev. Over the next 30 hours, the two crews visited each other’s spaceships, had lunch together, exchanged gifts, and gave live TV tours.

On July 19, the two craft temporarily undocked to perform a joint solar experiment, redocked and then, at 11:30am, undocked for good.  “It was a very good show,”Leonov declared. Brand answered, “This was a very good job.” Apollo 18 maneuvered away into a new orbit. Soyuz 16 stayed in its orbit another 30hours to perform a series of experiments, then landed in the Soviet Union, live on TV. Apollo 18 stayed in orbit an additional six days before landing in the Pacific Ocean near Hawaii.

The ASTP Apollo 18 Command Module is nowon display at the California Science Center in Los Angeles. The Soyuz 19 Re-entry Module is on display at the Energiya Museum in Moscow. At the Smithsonian Air and Space Museum in Washington DC, the entire Apollo-Soyuz configuration is on display, using the backup docking module and the original full-size Apollo and Soyuz mock-ups that were used to test it.