The Anhinga is one of the most readily-recognized symbols of Wild Florida. Virtually any wetland area that has fish, will have its contingent of Anhingas to catch them. 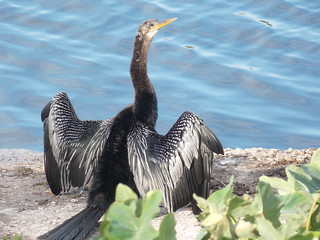 With its long neck (from which it gets its nickname “snakebird”) and its habit of standing at the water’s edge with its wings held out to dry in the sun, the Anhinga is a familiar site in Florida.

Anhinga anhinga is found from the Amazon River basin up to the Southeastern United States. The population in Central and North America is regarded as a separate subspecies, Anhinga anhinga leucogaster. Other birds in the same family, known as “Darters”, can be found in Africa, southern Asia, and Australia. In southern Florida and the Caribbean, Anhingas are year-round residents; more northern populations migrate south for the winter. Isolated Anhingas have sometimes been sighted in summer as far north as New Jersey.

Standing almost three feet tall and with a wingspan of almost four feet, the Anhinga is a strikingly handsome bird, with dark feathers on the back and belly and silvery-white speckles on the back of the wings. In males, the head and throat are dark with a greenish tinge; in females they are lighter brown in color. Anhingas can be distinguished from Cormorants by their long straight beak (Cormorants have hooked beaks) and their thinner build.

Unlike Cormorants, which freely enter saltwater, Anhingas prefer freshwater, and are found in swamps, riverbanks and ponds. They are very good divers, and routinely hunt for fish, frogs, baby alligators and other aquatic life by diving underwater and paddling with their feet, spearing any nearby prey with their long beaks and surfacing to swallow it, usually tossing a fish into the air several times to get it into a head-first position. They are often seen paddling around with just their head and neck above the surface. Unlike other waterbirds such as ducks, Anhingas do not have oil glands to waterproof their feathers. This allows water to push out any air bubbles in the feathers, preventing buoyancy and allowing the bird to dive and maneuver underwater. But it also means that the feathers become waterlogged, and once the bird emerges from the water it must spread its wings in the sun to dry to rid itself of the excess weight.

Anhingas usually breed once per year, in early spring. Both sexes develop bright blue rings around their eyes during mating season. While some breeding pairs may stay together for several years, others find new partners each season. The males will gather materials for nest-making–grasses and twigs–and pile them up in a nesting spot to attract a mate. If a female finds the display suitable, she will join in and use the material to construct a nest, either on the ground or on a tree branch. She will then lay one egg every couple of days, until reaching a clutch size of 4-6 eggs. Although Anhingas usually nest together in large colonies, each pair is fiercely territorial and defends their nest from others who may try to steal nest material.

The eggs are incubated by both parents for 25-30 days before hatching. The young are fed on regurgitated fish. At about three weeks, the young Anhingas can leave the nest and clamber around, and at six weeks they are capable of flight. They leave their parents at around nine or ten weeks, and reach maturity at two years. As they grow, Anhingas periodically molt and replace all of their feathers. During this period, they are unable to fly, and will carefully hide in tall reeds or shore vegetation. Wild Anhingas have lived up to 16 years.