For most people, the American automobile industry is made up of names like “Ford” and “Chevrolet”. But in the late 19th and early 20th centuries, the center of the auto industry was Clevelend, not Detroit, and it was dominated by the Winton Motor Carriage Company. In 1903, the first motor car to cross the US coast-to-coast was not a Ford or a Chevy, but a Winton, driven by a doctor from Vermont who did it on a bet. 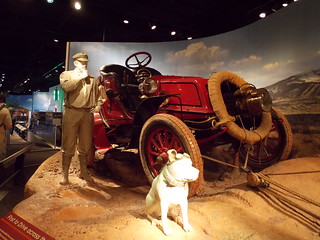 The 1903 Winston Touring Car “Vermont”, on display at the Smithsonian Museum of American History

There really is no easy answer to the question “who invented the automobile?”, largely because there is no easy answer to the question “what IS an automobile?” As a result, historians have put out a number of candidates. The very first “horseless carriage”, or wheeled vehicle that moved under its own power, was made in 1769 for the French Army by Nicolas-Joseph Cugnot; it used a steam engine, had three wheels, and moved at 2.5 mph. In 1832, Scotsman Robert Anderson made a carriage that ran on an electric motor. The first “true” automobiles, four-wheeled with gasoline-fueled internal combustion engines, were made in Germany; Karl Friedrich Benz produced his first model in 1885, followed by Gottlieb Wilhelm Daimler in 1886. The first practical American automobile is generally agreed to be that made by Charles Edgar Duryea in 1893–he and his brother Frank set up the first American car manufacturing company and produced a model with a 4 horsepower two-stroke gasoline engine.

In 1897, a Scottish bicycle manufacturer living in Cleveland, Alexander Winton, set up a car-manufacturing company, the Winton Motor Carriage Company. The 1897 Winton featured leather seats, rubber tires (made by the fledgling BF Goodrich Company), and a 10 horsepower engine capable of 33 mph. As a publicity stunt, Winton hired a driver to take the car from Cleveland to New York City, a distance of 800 miles. In March 1898, a resident of Port Carbon, Pennsylvania, named Robert Allison saw an advertisement for the Winton Motor Carriage in Scientific American, and became the first person to buy an American-made car, paying $1,000 for it. By 1899, Winton was the largest automobile manufacturer in the US, and opened the first automobile dealership in the country, located in Reading, Pennsylvania. One of Winton’s customers was James Ward Packard, who, the story goes, didn’t like his Winton car, complained to the company, and was told to do it better–Packard went on to form the Packard Automobile Company. Winton also had an ambitious young engineer from Detroit apply for a job in his factory, but turned him down–and Henry Ford decided to start his own car company instead.

By 1903, however, cars were still viewed as a rich man’s toy and an impractical novelty. They were expensive, broke down often, and uncomfortable to ride in. On May 18, 1903, while on vacation in San Francisco, Vermont doctor Horatio Nelson Jackson got involved in a dinner debate over whether an automobile was actually capable of driving all the way across the country. Although Jackson did not own a car and had taken only a few driving lessons, he accepted a $50 bet (about $2,000 in today’s money) that he could do it in less than 90 days, and announced that he would drive a car home to Vermont from California. He sent his wife home by train, purchased a used Winton 1903 Touring Car (which he named “Vermont” after his home state), hired a mechanic named Sewall Crocker to accompany him, removed the car’s back seat to make storage space for the camping equipment and spare parts they would need, had the car taken to Oakland by ferry, and set off for the East Coast. It was May 23, 1903.

After travelling just 15 miles, they blew a tire. It was just the first of many difficulties. There were no gas stations in 1903–they had to purchase cans of gasoline (used for farm machinery) at rural general stores. The dirt roads in the US were designed for horses, not cars, and the “Vermont” often got stuck in mud patches and had to be hauled out with a block and tackle. For a time, Jackson didn’t have any road maps, and at one point he was sent 108 miles out of his way by a local direction-giver who just wanted the car to go past his relatives’ house so they could see an automobile. In many areas there were no roads at all, and Jackson was forced to go cross-country over bare ground. Every time the car blew out a tire or developed a leak in the gas tank, the mechanic Crocker had to jerry-rig some way to fix it using local resources. Flat tires were fixed by winding ropes around the rim until a new tire could be found; a broken front axle was welded back together by a local blacksmith. When the first really serious breakdown occurred, on June 29 in Wyoming (one of the engine’s connecting rods broke), Jackson had to telegraph the Winton Company in Ohio for replacements, then wait for the parts to arrive by train before Crocker could install them. Somewhere in Idaho, Jackson’s coat, with most of his money in its pocket, fell out of the car, and he had to telegraph his wife to send him more money.

In Idaho, Jackson also picked up another travelling companion, a pit bull he named “Bud”. Bud was given his own pair of goggles to protect his eyes from the dust (the Winton Touring Car had no windshield). By now, the press had picked up the story, and accounts of the trip began to be sent by telegraph to newspapers all over the country. When Jackson and Crocker reached Omaha, Nebraska, on July 12, they were swarmed by reporters and photographers. Bud in particular became a media darling. On July 19, in Chicago, Bud wandered off and was temporarily missing, prompting a city-wide search until he was found.

The success of Jackson’s road trip established the automobile as a viable alternative to railroads for long-distance travel. By 1920, Henry Ford’s assembly-line method of mass production had made automobiles cheap enough for most people to afford, and a network of trans-continental roads appeared. The car would come to dominate American industry and culture.

After his cross-country drive, Horatio Jackson went on to become an Army Officer in the First World War, helped found the American Legion, and ran twice, unsuccessfully, for Governor of Vermont. He donated the “Vermont” motor car to the Smithsonian in 1944, where it was restored and is now on display, along with Bud’s original goggles, at the Museum of American History.