Dinosaurs were first discovered by science in the 1820’s, and were depicted as slow, plodding, tail-dragging, dim-witted animals. But in the 1970’s and 1980’s, our whole impression of dinosaurs was profoundly changed–now dinosaurs were viewed as fast-moving warm-blooded active and intelligent creatures, and this shift in perception had an enormous impact on science and popular culture, leading to a “Dinosaur Renaissance” in the 1990’s. 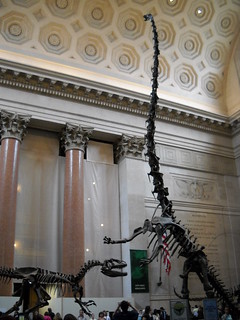 Barosaurus rears up to tower over an Allosaurus, in the Rotunda of the American Museum of Natural History in New York.

For thousands of years, people all over the world had been finding huge bones buried in the ground, which they variously identified as “giants” or “dragons”. It wasn’t until 1824 that the true nature of these bones was realized–they were the remains of large extinct animals that lived long ago. In 1824, scientists in Europe gave the first scientific description of a dinosaur, a large two-legged meat-eater which was named Megalosaurus (“giant lizard”). Within a few years, fossils of Iguanodon, Hylaeosaurus, and Hadrosaurus had been found and described. In 1841, the British scientist Richard Owen grouped all the extinct giant reptiles together into a new suborder, which he named “Dinosauria” (“terrible lizards”).

In 1851, London was host to a world fair known as the “Great Exhibition of the Works of Industry of all Nations”, held in an enormous structure of glass panels and iron lattice known as “The Crystal Palace”. One of the exhibitions on display was a lifesize cement model of an Iguanodon, the first reconstruction of a dinosaur. In the years after the Great Exhibition, a series of new cement dinosaurs were reconstructed and displayed in “Crystal Palace Park”. Designed by Richard Owen himself, the models reflected the very latest in scientific views about dinosaurs–they were depicted as heavy cold-blooded turtle-like animals with tiny brains that plodded slowly on all four feet and lived mostly in swamps, using the water to help buoy up their huge bulks. The very word “dinosaur” came to mean, in popular culture, any large plodding dim-witted entity that was doomed to extinction. In museums, mounted dinosaur skeletons were posed as static tail-draggers who were not very active. That view did not change much for over a hundred years.

The first ray of light in the “Dinosaur Renaissance” came in 1964, when paleontologist John Ostrom of Yale University began studying a small predatory theropod dinosaur, about ten feet long from nose to tail, that he named Deinonychus. From studying the bones, it became clear to Ostrom that this was not a slow-moving lizardlike animal, but a fast agile active hunter that was built for speed and pursuit. Many of the bones shared distinctive characteristics that were only found in birds, leading Ostrom to resurrect a long-discarded view (first proposed by Thomas Huxley in the 1860’s) that birds were the evolutionary descendants of the theropod meat-eating dinosaurs. Ostrom even proposed that these theropod dinosaurs had been warm-blooded, and were capable of remaining active in all environmental conditions.

Ostrom’s ideas became the subject of much debate in the paleontological community, but didn’t really reach the public until 1986, when a former doctoral student of Ostrom’s, Robert Bakker, wrote a popular book titled The Dinosaur Heresies. In it, Bakker presented numerous arguments from multiple lines of evidence to support the idea that dinosaurs were not slow-moving dim-witted cold-blooded swamp-dwellers, but were fast-moving warm-blooded active animals with intelligence and sophisticated social organization. Bakker also supported the thesis that the small predatory theropod dinosaurs like Deinonychus were the ancestors of birds–in his book, Bakker gave an illustration of Deinonychus that showed it covered with feathers, which it used as insulation to conserve the body heat produced by its warm-blooded metabolism.

Bakker’s book set off a renewed interest in dinosaurs, both scientifically and in popular culture, that became known as the Dinosaur Renaissance. New scientific discoveries followed one another in rapid succession. Paleontologist Jack Horner found fossilized dinosaur eggs demonstrating thatMaiasaurus (“good mother lizard”) cared for its eggs and young in nests, like modern birds. Study of fossil footprint trackways led to the conclusion that many dinosaurs moved in herds and probably had active social lives. (The tracks also displayed no drag marks–the tails of these active animals were held off the ground, not dragged along behind them as they lumbered along.) Geologist Walter Alvarez found evidence of an asteroid impact in Mexico at the time the dinosaurs went extinct–they had not died out because of their inferior intellects or physiology, but because of a global natural disaster. Detailed study of the interiors of fossilized dinosaur bones demonstrated that they were warm-blooded and had growth rates more like modern mammals than like crocodiles or other reptiles. In China, fossils were found of dinosaurs with unmistakable feathers, illustrating a detailed progression from theropod dinosaurs to modern birds. In 1993, the Dinosaur Renaissance reached the public in a massive way, when the hugely successful Steven Spielberg movie Jurassic Park, with Jack Horner as scientific consultant, depicted dinosaurs as active intelligent animals living in social groups. (As an homage, inJurassic Park II, Bakker was himself depicted as a fictional character–he was eaten by a T rex.)

In 1991, the flagship dinosaur museum in the US, the American Museum of Natural History in New York City, began changing its dinosaur displays to reflect the new ideas. The mounted dinosaur skeletons were transformed from lumbering tail-draggers into active energetic animals. The most visible display was in the Rotunda at the main entrance. Here, a predatory Allosaurusskeleton was mounted in an active hunting pose, with a snarling attitude and its tail held high in the air. Paired with the Allosaurus was the large sauropod plant-eater Barosaurus, its intended prey, who is depicted as actively defending itself, reared up on its back legs and its long graceful neck towering high over the predator. Within a short time, other natural history museums followed suit and modified their dinosaur displays, marking the finish of a scientific revolution that completely changed our views about dinosaurs.