One of the most interesting of Florida’s reptiles are the Glass Lizards of the genus Ophisaurus. These long, legless reptiles are frequently mistaken for snakes, and even the scientific name of the genus is translated as “snake lizards”. The Ophisaurs, however, are actually lizards. 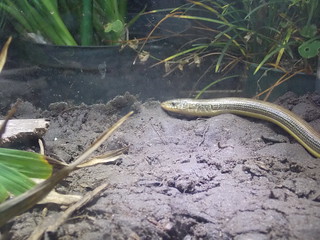 Glass Lizards can be readily distinguished from snakes by the presence of movable eyelids and by the visible ear holes at the side of the head, neither of which are found in any species of snake. Glass Lizards also lack the large rectangular belly scales which are found on nearly all snakes.

The most common of these is the Eastern Glass Lizard, which is found in the southeastern United States. The body has a greenish color to it, with several darker stripes running lengthwise along the back. There are a number of vertical white bars at the neck. At a maximum length of 3.5 feet, it is the longest lizard found in North America (though over two-thirds of their length consists of tail). They have lived up to ten years in captivity.

The common name of the Glass Lizards refers to their ability to defend themselves by casting off their tail. They have pre-set fracture planes in the vertebral bones of the tail which can be voluntarily separated. When threatened by a predator, Glass Lizards can deliberately cast off the tail, which then convulses violently to draw a predator’s attention away from the lizard’s body. Since the Glass Lizard’s tail is several times as long as its body, it often breaks into several pieces, each of which twitches and moves independently. The lizard, after crawling away, slowly regrows a new tail, which is usually a bit shorter than the original and is different in color. (Rarely, an incomplete break will stimulate the lizard to regenerate another tail, producing a lizard with a forked tail or two entirely separate ones.) Since Glass Lizards are rather nervous, they will often drop their tails at the slightest provocation, and animals with intact original tails are rare. The Island Glass Lizard species, interestingly, lacks these fracture planes and cannot shed its tail as easily as the others.

According to folklore, the “Glass Snake” breaks into pieces if it is struck, and each piece then crawls away, only to meet again later and reassemble themselves into a single animal. This, of course, never actually happens.

The Eastern Glass Lizard prefers damp grassland and hardwood hammocks. It is also common in urban and suburban areas, where it can be found in parks, cemeteries, and backyards. It spends much of its time underground, burrowing its way through the sand and leaf litter in search of food, though it can also be seen hunting on the surface. It is often encountered by humans when heavy rains flood its burrow and drive it to the surface.

In the wild, Glass Lizards feed on a wide variety of prey items, including insects, spiders, snails and slugs, worms, and smaller reptiles. They are active hunters, and pursue their quarry tenaciously. Unlike snakes, Glass Lizards can’t unhinge their jaws, so they can only swallow small-sized prey.

When handled, Glass Lizards feel “stiff”. The skin is protected by a layer of bony platelets called “osteoderms”, and these give the lizard an armored texture. To the keeper who is accustomed to handling snakes of similar size, the contrast between the rigid feel of a Glass Lizard’s body and the suppleness and fluidity of a snake is striking.

All of the Florida Ophisaurs are egg-layers. Breeding takes place in April or May, and a clutch of 7-17 eggs is produced about 60 days later. (The Island Glass Lizard produces much smaller clutches of no more than four eggs). In all of the American species, the female curls around the eggs and broods them–an unusual behavior pattern for a lizard. During this time, the female is able to raise her body temperature several degrees above that of the surrounding air, through muscular contractions, to help incubate the eggs. If approached by a predator, however, the female will usually flee and abandon the nest.

The eggs hatch after about two months. The hatchling lizards measure about 7 inches, and have brighter colors and more vivid patterns than their parents. They immediately wander off on their own and receive no parental care.