It was a nightmare scenario for NASA’s moon mission planners–a human triumph turning into tragedy as space-borne moon germs, brought back by astronauts, swept the Earth and killed all terrestrial life with a lethal unstoppable disease. To prevent it, NASA developed a Space Age motor home trailer for astronauts called the Mobile Quarantine Facility. 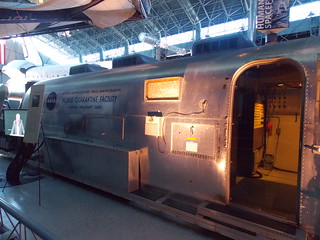 The Mobile Quarantine facility, on display at the Smithsonian Udvar-Hazy Center

In the early 1960’s, humans were about to begin the process of achieving a technological and historical milestone, as NASA prepared for the Apollo flights that would take humans to the Moon. At the time, however, virtually nothing was known about what the astronauts would find there. One possibility was particularly disturbing–what if there is some exotic and strange microbe or organism living on the moon that could be accidentally brought back to Earth by the astronauts, infect everyone with a communicable disease for which humans had no natural immunity, and wipe out all life on the planet (a scenario later used in Michael Crichton’s best-selling 1969 book The Andromeda Strain)? In 1963, the National Academy of Sciences recommended that NASA take steps to protect the Earth from any possible contamination from the Moon. As a result, when the crew of Apollo 11 (Neil Armstrong, Buzz Aldrin and Michael Collins) returned and splashed down in the Pacific, they (and all the equipment and moon samples they had brought with them) were required to follow a strict protocol to prevent any possible contamination.

The process began even before the astronauts landed. As the Apollo Command Module floated to the Pacific on its red and white parachutes, a US Navy helicopter from the aircraft carrier Hornet,piloted by Commander Don Jones, flew to meet them. Jones and his crew were wearing sealed anti-contamination suits called “BIGs” (“Biological Isolation Garments”). These were modified versions of chemical warfare protection suits, with airtight rubberized cloth, rubber boots and gloves, and a sealed mask that fed air through a filter system. As soon as the astronauts splashed down and opened the hatch to the Command Module, divers tossed them a set of BIGs which, in the cramped confines of the CM, they had to put on before leaving the capsule and entering the helicopter to be carried back to the Hornet.

On board the Hornet, the three astronauts were quickly whisked into a silver-colored trailer-looking thing resting on the carrier’s deck. This was the Mobile Quarantine Facility (MQF). If it looked like a vacation trailer, that’s because it was. NASA had ordered four MQFs to be built by the Airstream Company, one of the largest makers of mobile homes in the US, at a total cost of a quarter of a million dollars. The MQFs were 35 feet long, 9 feet wide and 8.5 feet tall, and weighed about 6 tons. They were essentially motor homes without the wheels, with an aluminum skin, large specially-sealed window, a living room, bedrooms, bathroom and kitchen, but NASA fit each of them with a complex “underpressure” system–the air pressure inside the trailer was kept slightly lower than normal atmospheric pressure outside, so if any leak developed, the higher air pressure outside forced its way in, preventing any potentially-contaminated air escaping from inside. Air entering and leaving the trailer’s breathing system was passed through a long line of filters and scrubbers, which used various decontaminating chemicals to sterilize it. The modified trailer used for the Apollo 11 crew was actually the third one delivered by Airstream.

Once inside the Mobile Quarantine Facility, the three Apollo 11 astronauts were able to take off their BIG suits.  They were joined inside by NASA doctor William Carpentier, who would monitor the crew’s health through the quarantine period. The Mobile Quarantine Facility may have seemed like a hotel to the astronauts–the MQF had several times as much interior space as the cramped interior of the Command Module, in which they had just spent the last week, had.

Once they were settled into the MQF, the astronauts received a visit from President Richard Nixon, who talked to them through the window by phone. The Hornet, meanwhile, set course for Pearl Harbor, Hawaii, where they arrived two days later. The entire 6-ton MQF, with the astronauts and other crew still inside, was then trucked to Hickam Field, loaded onto an Air Force C-141 transport plane and taken on a flight to Ellington Air Force Base in Texas, where the astronauts were finally able to talk to their wives and families by phone through the window. The MQF was then trucked to the Lunar Receiving Laboratory at the Johnson Space Center in Houston, where after 65 hours inside, everyone was finally able to leave the trailer, and enter a specially-built self-contained quarantine quarters. The astronauts remained quarantined inside the Lunar Receiving Laboratory for another two weeks.

The Command Module capsule, meanwhile, was also sealed shut and quarantined.  It was assumed that any Moon microbes clinging to the outside of the craft would have been sterilized by the searing heat of re-entry, but NASA protocols called for everything inside the craft–all the space suits, all the equipment and tools, all the lunar soil and rock samples–to undergo quarantine too in case they had been contaminated by any space germs. All of these things were transferred in sealed containers to the Lunar Receiving Laboratory, followed shortly later by the sealed spacecraft itself. Once NASA engineer John Hirasaki completed the task of emptying the Command Module, he too joined the astronauts on the Hornet–inside the Mobile Quarantine Facility.

At the end of the 21-day quarantine, the astronauts and NASA engineer were given a clean bill of health and were finally allowed to leave quarantine. The moon samples and equipment remained quarantined for an additional week.

When the Apollo 12 mission returned from the moon later in 1969, the same protocol was followed. This time, however, the splashdown happened just three days before Thanksgiving, so astronauts Pete Conrad, Alan Bean and Richard Gordon spent Thanksgiving Day on board theHornet inside the MQF. NASA thoughtfully provided them with a full turkey dinner.

In 1970, the Apollo 13 crew had a serious accident on the way to the moon and never landed, so their MQF was never used. In 1971, the Apollo 14 crew was quarantined in the fourth MQF. After Apollo 14, NASA finally concluded that the Moon was sterile and there was no danger of space germs being brought back. As a result, the crews of Apollo 15, 16 and 17 did not have to go through the quarantine process.

Ironically, Apollo 12 proved that, although the Moon did not have any indigenous microbial life, it did have bacteria living on it . . .

In April 1967, the unmanned probe Surveyor 3 landed on the Moon as part of NASA’s effort to study the lunar surface in preparation for the Apollo landings. When Apollo 12 landed in November 1969, the landing site was deliberately chosen to be just 500 feet away from the spot where the Surveyor had landed–NASA wanted the opportunity to recover some pieces from the probe and study what effects the years of exposure to the space environment had on them. One of the bits that were removed from Surveyor by the astronauts and brought back with them was the probe’s camera housing. And when NASA scientists examined the camera housing back on earth, they were astounded at what they found–living bacteria. But these weren’t extraterrestrial life–these were Earth bacteria, Streptococcus mitis, the common bacteria that causes plain ole ordinary strep throat. Some time in 1966 when the Surveyor probe was being assembled, one of the NASA workers apparently had a cold and sneezed into the camera housing, and the germs hitchhiked all the way to the Moon. Incredibly, they had survived there, in the total vacuum of space, for almost three years, perhaps as dormant spores, only to be revived again when they were returned to Earth by the Apollo 12 crew. It was an amazing demonstration of the resilience and toughness of microbial life.

One thought on “The Mobile Quarantine Facility: Protecting the Earth From Moon Bugs”