Florida is the land of invasive species. Because of our status as a center for the importing of exotic pets and houseplants from overseas, and our neo-tropical climate, we have been invaded by everything from kudzu plants to Burmese pythons. And one of our invaders–the European Starling–is all William Shakespeare’s fault. 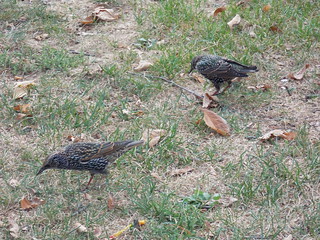 In 1854, the prominent French biologist Isidore Geoffroy Saint-Hilaire helped organize a group in Paris that called itself the “Society for Acclimatisation”, which had as its stated goal the introduction and establishment of plants and animals into France from around the world, “such as may be useful or desirable”. Within a few years, similar societies appeared around the world. They were particularly popular in colonial regions, where homesick Europeans embraced the idea of bringing in familiar plants and animals to make them feel more at home. While the idea of deliberately bringing in non-native wildlife may strike us today as odd or even dangerous, the Europeans knew nothing of the hazards of introduced species, and the practice reflected the political and social ideas of their time, that European culture (in all its aspects) was superior to the wild savagery of the rest of the world, and that it was a service to humanity to bring “Europe” everywhere. “Acclimatisation Societies” appeared across the world, from England to Australia, and in 1871 the American Acclimimatisation Society was founded in New York City by the wealthy medical-drug manufacturer Eugene Schieffelin.

Previous efforts had already been made to bring a little bit of Europe to the Americas. In the 1860’s, the commissioners of Central Park had already imported and released English Sparrows, Chinese Pheasants, Skylarks and European Robins, with the aim of “improving the beauty” of the park. (The Sparrows and the Pheasants were spectacularly successful, and now inhabit most of the US.)

Schieffelin, an enthusiastic student of English literature, brought an odd twist to the story, however, when he convinced the Acclimatisation Society to introduce every species of bird that was mentioned in the complete plays of William Shakespeare. In the Bard’s historical play Henry IV, the character Hotspur proclaims of the King, “I will have a starling shall be taught to speak nothing but ‘Mortimer,’ and give it him, to keep his anger still in motion.” In 1890 and 1891, the Society released approximately 100 European Starlings into Central Park . . .

The Starling (Sturnus vulgaris) is a common bird in Europe. About the size of a robin, it is a strikingly handsome bird–dark blue or black with white feather tips that give it the appearance of a starry sky, hence its name. Starlings travel and feed in large raucous flocks. They are accomplished mimics and captives have been taught to talk–which is why it appears in Shakespeare’s play.

The birds need trees with cavities for nesting and grassy open areas to forage for insects and seeds, and therefore suburban lawns and city parks suit them perfectly. Within a few decades, the Starlings released in Central Park had spread outwards, and soon covered the entire country. The first record in Florida is a Starling captured in Jacksonville in 1918; they had reached southern Florida by 1950. Today there is an estimated 200 million Starlings in the US. The species has also been deliberately introduced into Australia, South Africa, Jamaica, and New Zealand–usually as a way to control agricultural insect pests. The Starlings compete with native birds for food supplies. They also monopolize many of the suitable locations for nest cavities. In areas with large flocks, the blanket of highly-acidic bird droppings can kill trees, damage buildings, and wreck the paint on parked cars. Flocks that gather in the open areas of airports are one of the leading causes of bird strikes. Starlings are now on the International Union for the Conservation of Nature list of “The 100 Worst Invasive Species”.

If Shakespeare had known of the ecological damage he inadvertently caused, perhaps Hotspur would have given King Henry a parrot instead.