Florida is the land of invasive species. Because of our status as a center for the importing of exotic pets and houseplants from overseas, and our neo-tropical climate, we have been invaded by everything from kudzu plants to Burmese pythons. One of our most common invasives is a brightly-colored aquatic turtle called the Red-Eared Slider. Extremely common in the pet trade, the Slider has been introduced around the world, prompting some biologists to label it as “The Reptilian Norway Rat”. It is listed by the International Union for the Conservation of Nature as one of the “100 Most Invasive Species in the World”. 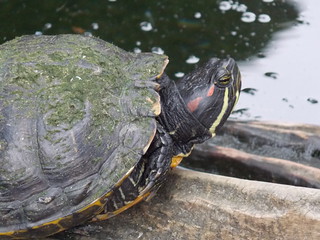 When I was a little kid in Pennsylvania, I was, like many other kids, instantly attracted to the Red-Eared Slider. With its bright green, red and yellow colors and its cute little face, baby Sliders the size of a half-dollar could be found in every Woolworth’s and K-Mart, living in a tray of water with a little island and a plastic palm tree. They were sold by the thousands. Unfortunately, baby turtles are difficult to care for properly, and mine, like so many others, soon got flushed to a watery grave. But later, the relatives of these little turtles would become a scourge across the entire planet . . .

The Red-Eared Slider, also known as the Red-Eared Pond Turtle, Trachemys scripta elegans, is a member of the Emydid family of turtles, consisting of about 50 species, known collectively as “pond turtles”, “cooters” or “sliders”. Most of the family is native to the Southeastern United States and Mexico. They are largely aquatic, spending their days in freshwater rivers and ponds basking onshore on rocks or logs (and dropping into the water at any disturbance), and feeding on fish and small aquatic invertebrates (many species also include aquatic plants in their diet, especially when they are adults).

In the early 1950’s. the Red-Eared Slider was introduced to the pet trade. Because the turtle breeds readily and can be easily farm-raised, millions of baby turtles flooded the market–the bright green little turtles could be found cheaply in any dime store, pet shop, and department store. Sales in the 1960’s reached as high as a million a year.

As adults, they make nice pets and are relatively easy to care for, though baby turtles need special requirements like ultraviolet lighting and a calcium-rich diet. Red-Ear Sliders grow to a shell length of about ten inches. They are active swimmers, and require a large tank with an efficient filter system, as well as a large land area for basking. Sliders can live as long as 40 years.

Virtually all of the baby turtles that were being sold as pets, however, died within their first year, the victims of inadequate care. Released babies could not usually survive in the wild. Animal welfare groups, appalled by the high death rate, began lobbying for legal restrictions. By the 1970’s, the fad had all but disappeared, and the number of turtles in the pet trade fell to almost nothing. In 1975, the US government, alarmed by the possibility of Salmonella transmission to humans (the bacteria are found naturally on turtle shells), finally banned the sale of baby turtles as pets.

The situation changed drastically, however, in the 1980’s, when the TV show/movie “Teenage Mutant Ninja Turtles” became a smash hit. Now, turtles once again became a huge craze in the pet trade, and farm-raised adults were sold by the millions all over the world–and by now, improved knowledge about their captive care meant that a large proportion of these were surviving for many years. As children tired of their pets and parents no longer wanted to maintain the large aquariums necessary for them, adult Red-Eared Sliders began to be dumped into rivers and ponds all over the world. Unlike the rather delicate babies, adult Sliders are tough and adaptable; they soon thrived in their new wild homes.

By the early 1990’s, wild non-native populations had been established in at least 23 states in the US, from California to New York and as far north as Michigan, and had also become established in Hawaii, Guam, Britain, Japan, Australia, New Zealand, South Africa, Israel, France, Canada, Germany, Bahrain, and Mexico. Some countries in Southeast Asia imported the turtle as food, not as pets, but the result was the same, as escaped/released Red-Eared Sliders began to establish themselves in local waterways. By 2005, the species could be found on every continent in the world except Antarctica. Even in areas where it is too cold for the turtles to breed successfully, their populations are constantly replenished by fresh supplies of newly-released pets. By 2010, the turtle had been legally banned as an invasive species by many countries, including Australia and the European Union.

In the 1960’s, some isolated populations of Red-Eared Slider were already being seen in Florida, but it wasn’t until the “Ninja Turtle” craze of the 1980’s that the number of Sliders exploded and the species became widely established throughout the state. By the 2000’s, the non-native turtles outnumbered the native Florida Redbelly species, and the Sliders had even successfully adapted to living in salt-water bays and inlets. State officials became more alarmed when it was discovered that the introduced Red-Ear Sliders were beginning to interbreed with the native Yellow-Bellied Sliders, swamping them out genetically and endangering the entire subspecies. (Other states have faced similar problems with other members of the Trachemys genus.)

In 2007, Florida banned the sale of Red-Eared Sliders within the state; it is also illegal to move a Slider from one location in Florida to another or to release one. People who already have Red-Eared Sliders can keep them, but have to meet housing requirements to prevent escapes, are banned from obtaining any more, and are required to destroy any offspring. Commercial turtle breeders are still allowed to farm-raise the species, but they can only be sold out-of-state. Florida makes an exception for specially-bred “color morphs” such as albino turtles–the higher price on these, it was assumed, would make it less likely for individuals to release them into the wild, and the non-natural colors would reduce their chances of survival even if they were released.

So no matter what state you live in, the odds are that you will sooner or later encounter one of the “Reptilian Norway Rats”.