Nothing symbolizes “Florida” more than the American Alligator. Once seriously endangered and on the brink of extinction, the Alligator has now made a remarkable comeback, and of the 5 million or so gators currently in the Southeastern US, about one-fourth of them live in Florida. It is by far our most famous resident. 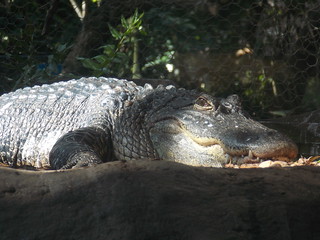 When the Spanish explorers reached Florida in the 16th century, they encountered huge lizardlike reptiles inhabiting the swamps and rivers, and called it “el lagarto“–“the lizard”. This was anglicized into “alligator”. Although ancient alligators were spread across most of the world, today only two species remain, on opposite sides of the globe–the critically endangered Chinese Alligator, which inhabits the Yangtze River, and the American Alligator, found from North Carolina to Texas. Central and South America are also home to the closely related Caimans and to the American Crocodile.

Biologically, Alligators, like the other crocodilians, are members of the Archosaur group, and are very similar to dinosaurs and birds. Like birds (but unlike most reptiles), crocodilians have four chambered hearts, which prevent oxygenated and unoxygenated blood from mixing. Unlike other reptiles, which have teeth attached to the sides of their jawbones, Alligators and Crocodiles have socketed teeth, which modern birds no longer have but their ancient ancestors once did. Most reptiles have limbs that splay out to the sides, but crocodilians are able to walk with a distinctive “high-legged” rapid gait in which they place their feet directly below their bodies, like a dinosaur or bird. (Some ancient crocodilians were even able to walk upright on two legs like dinosaurs.) Also like birds, crocodilians make nests and care for their eggs and young–the youngsters even make birdlike chirping calls for mommy’s protection when they are afraid of something.

The American Alligator is by far the largest reptile in the Americas. Written accounts from colonial times mention gators as long as 20 feet. Today, the largest authenticated Alligator in Florida was just over 14 feet and weighed around 1,000 pounds, but the average is closer to 8 or 9 feet. Unlike in most reptiles, the males are bigger than the females. In spring the adult males become fiercely territorial, driving away any rivals. The bull gator will mate with a number of females in his territory, who in early summer will lay 30-40 eggs on shore and scrape together leaves and vegetation into large mounds to cover the nest. During this time the females can become very defensive and may charge humans that approach the nest too closely. About one-third of all nests will fail, either drowned by rising summer floodwaters or raided and destroyed by egg-eating raccoons or other predators.

The vegetation provides heat for incubation as it decays. Gators are unusual in that their gender is not determined by genetics–instead, the temperature at which the eggs are incubated determines if it produces a male (at higher temperatures) or a female (at lower temperatures). Since the heat distribution inside the nest is usually uneven, a single nest will produce both males and females.

When the eggs are ready to hatch, in August and September, the baby gators will begin to make a high-pitched chirping call while still inside the eggs, prompting the mother to dig them up. Hatchling Alligators are about eight inches long, and have bright yellow stripes across their bodies. For their first year or so they will stay close to their mother. Although Mommy will protect them from predators, the death rate for young gators is high. Baby gators are prey for otters, raccoons, large shorebirds, snapping turtles, and even large fish. Their most important predator, however, is other Alligators–larger adults will happily eat small gators. The youngsters will grow about one foot per year until they reach about four feet, at which time they become invulnerable to most predators (and lose their juvenile yellow stripes). Only about one in nine hatchlings lives to reach sexual maturity at a length of around 6 feet. In the wild, Alligators live for about 40-50 years; in captivity they can live as long as 60-70 years.

Like other reptiles, Alligators are ectothermic–they do not produce their own body heat through metabolism, but use the energy from sunlight to maintain their body temperatures, and spend most of their time basking. Gators lead a lazy low-effort lifestyle, and are masters at conserving energy. They hunt mostly at night, capturing any sort of aquatic animal they can find, from fish to turtles to shorebirds to mammals that come to shore to drink. Smaller prey is crunched up and swallowed whole; larger prey is pulled into the water and drowned, then disassembled for swallowing. Shorebird nesting spots are favored hunting places–the gators snap up any nestlings that fall into the water, and in return they prevent swimming mammalian predators from reaching the bird nests. Because of their ectothermic biology, gators do not require large amounts of food; one good meal every few weeks is usually sufficient, and they can go months without eating if necessary. During the winter they usually don’t eat at all.

As water levels fall during the dry season, adult Alligators will make large wallows in the mud, connected by channels, that fill with groundwater–these “gator holes” are important refuges for birds, turtles and other aquatic animals. In the northern parts of their range, Alligators can tolerate freezing temperatures, poking holes in the ice to breathe and going into a dormant state until spring.

The close proximity between Alligators and humans can cause problems for both. Wandering young males can easily climb fences or dig under them, and often end up in backyard swimming pools. Most neighborhood retention ponds are inhabited by gators, and it’s not unusual for Alligators to attack domestic dogs that wander near the water. On average about five people per year are attacked by Alligators in Florida, with an average of one fatality every four or five years. In nearly every case, this is the result of Alligators that have lost their natural fear of humans by being fed by well-meaning but misguided persons. Florida has a number of licensed alligator trappers who capture and remove “nuisance gators”. These trappers are not paid by the state; they get their money by killing the gator and selling it for its meat and hide.

As the human population of Florida grew rapidly in the 1940’s and 1950’s, the Alligators suffered a severe loss of habitat as well as increased hunting for the leather trade. By the 1960’s, populations had dropped to dangerously low levels, and it was feared the species might go extinct. When the Endangered Species Act was passed in 1973, the American Alligator was one of the first species listed. Efforts were made to preserve and expand their wetlands habitat, and gators began to be farm-raised. By 1987, the species had recovered enough that it was removed from the endangered list, and the American Alligator is today one of the best-known success stories of the conservation movement