Florida is the land of invasive species. Because of our status as a center for the importing of exotic pets and houseplants from overseas, and our neo-tropical climate, we have been invaded by everything from kudzu plants to Burmese pythons. One of our invaders is a free-floating aquatic plant with showy violet-blue flowers, the Water Hyacinth. Its aggressive invasiveness have led biologists to label it “the worst plant in the world”. 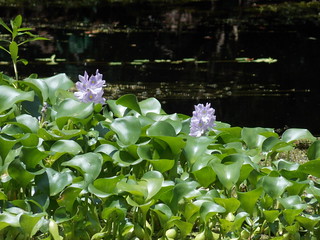 The Water Hyacinth, Eichhornia crassipes, is in the family Pontederiaceae, which includes other aquatic plants such as Pickerelweed and the Mud Plantains. It is native to Brazil. Unlike Pickerelweeds, which root themselves in the mud at the shoreline, Water Hyacinth is free-floating, consisting of wide rosettes of thick round or fan-shaped leaves, each leafstalk with a bulbous swelling near the base that provides flotation. The feathery roots dangle into the water, and the violet-blue flowers bloom on stalks that can extend as much as three feet above the plant. Water Hyacinth is the fastest-reproducing plant that has ever been measured–in addition to seeds, the plant can reproduce asexually by sending out horizontal runners called “stolons” which produce daughter plants. A single plant is capable of producing as many as 600 offspring within four months. A patch of Water Hyacinth can easily double its size in less than two weeks, and form thick dense mats in which most of the individual plants are linked to each other through stolons.

Because of its free-floating lifestyle and its attractive foliage and flowers, Water Hyacinth has long been popular for use as an ornamental plant in water gardens, fish ponds and aquariums, and has been widely exported around the world (many Internet aquarium shops sell it). As a result, it is one of the most common invasive plants on earth, and has now been established in over 50 countries in Africa, Asia and Australia. In the US, Water Hyacinth has become introduced throughout the Southeast, from North Carolina to Texas, and also in southern California and Hawaii. The plants have also been found in the wild in New York, Tennessee, Kentucky, Washington, Missouri, Arkansas and Oregon, but because the tropical Water Hyacinth cannot tolerate cold temperatures, they cannot survive the winter in these northern areas.

Once it becomes established, the plant can quickly cover an entire body of water, from shore to shore. The dense mats block out sunlight, killing off most of the native aquatic plants. They also reduce oxygen levels in the water, which can kill fish and other aquatic life. One acre of Water Hyacinth plants can weigh over 200 tons, enough to interfere with boats, making many rivers un-navigable, and to choke off water flow, turning the water stagnant. It also deposits about 500 tons of dead and rotted plant material on the bottom each year, leading to ponds and waterways being filled in.

It is believed that Water Hyacinth first entered Florida in 1884, by way of New Orleans. In 1884, at the New Orleans World Fair, a pavilion from Japan was giving out free Water Hyacinths as ornamental water plants (why the Japanese were giving out a plant from Brazil is a question that can no longer be answered.) One of the visitors to the World’s Fair was Mrs WF Fuller from Florida, who took the lovely little plant with her back to Palatka, on the St John’s River, and put it in her outdoors fish pond. When a sheet of Water Hyacinth covered her pond, she thinned it out, tossing some extra plants around her boat dock on the St John’s River. By 1896, the plant covered more than 200 miles of river. When cattle rancher Eli Morgan saw how quickly the plant grew, he in turn decided it would make a good food source for his cattle, and transferred some Water Hyacinths to his ranch on the Kissimmee River. As it turned out, Water Hyacinths aren’t very nutritious and the cattle didn’t like them anyway. But the plants soon spread along the Kissimmee River, reaching Lake Okeechobee and fanning out across southern Florida. By the 1960’s, Water Hyacinth mats covered some 120,000 acres of ponds and rivers all over Florida.

The state launched a multi-million dollar campaign to eradicate the invader. The plant was made illegal to import, keep, or release. Waterborne machines were developed to grind the mats into pulp, and large amounts of plant poisons were sprayed onto them. In some areas, two species of Hyacinth Weevils, insects from Brazil that kill the plants, were released as a form of biological control. Although reduced by over 98%, however, the plant defied all efforts to eradicate it. Today, Florida uses a constant program of “maintenance control” to keep the invasive plant at a tolerable level.